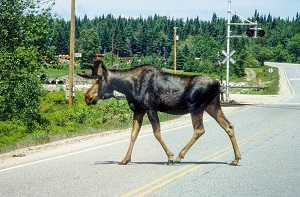 “Motorists hit 47 moose on Vermont highways during 2019 and 30 so far this year,” said State Game Warden Major Justin Stedman.  “We are asking drivers to be especially careful and for people to enjoy watching moose from a distance.  Moose can be unpredictable and dangerous if you get too close and they feel cornered or get irritated.”