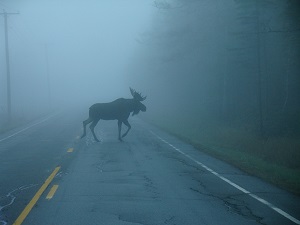 Drivers need to be alert and cautious because moose are on the move, according to the Vermont Fish and Wildlife Department.  Moose are more likely to be crossing roadways at this time of year, especially after dark or early in the morning because this is breeding season for moose.

“Motorists hit 39 moose on Vermont highways during 2020 and 41 so far this year,” said State Game Warden Lieutenant Carl Wedin.  “We are asking drivers to be especially careful and for people to enjoy watching moose from a distance.  Moose can be unpredictable and dangerous if you get too close and they feel cornered or get irritated.”

Moose are a threat to motorists, but there are measures you can take to avoid hitting them, according to Fish and Wildlife: