Be Aware of Bears in Bear Country 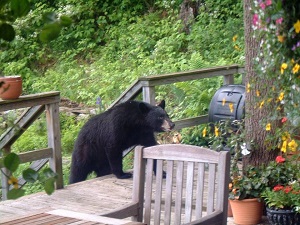 A recent incident involving bears in Wilmington should bring to the attention of those who rent out or manage property rentals in bear country that it is important to provide information about bears to renters so they can take the necessary measures to avoid encounters with bears, according to the Vermont Fish & Wildlife Department.  It also serves as a reminder to the rest of us that garbage should be properly managed in general to avoid human-wildlife conflicts.

On Sunday afternoon, August 16, the Wilmington Police Department received a call from the owner of an Air B&B in Wilmington, who reported that a bear was inside the property and a renter was forced to lock herself in a bedroom.

Wilmington Police Officers were first on scene and reported seeing a sow and two cubs leaving the residence and taking off into the woods.  The adult female occupant of the residence was escorted to the safety of a nearby car.

Upon the arrival of the local State Game Warden, the house was cleared and secured after the female occupant reported that she believed there was still a bear in the basement of the property.  The warden checked and there were no more bears in the residence.

Investigation revealed the bears had entered the property through an open slide door on a second level deck.  Nothing was disturbed or damaged inside the house, but there were two bags of garbage in the kitchen.  A torn bag of garbage was found nearby in the woods which indicated one or more bears likely had access to garbage prior to this incident.  Food residue on a gas grill was subsequently burned off to remove odor that might attract bears.

“While the occurrence of bears entering residences in Vermont continues to be rare, it does happen periodically,” said State Game Warden Richard Watkin.  “This event highlights the importance of taking measures to avoid these incidents from becoming more frequent.  As a general precaution, garbage should not be accessible to bears.  Unsecured bags of trash should either be housed in a secure building or structure or kept in a bear-proof garbage receptacle until they can be removed.  Garbage can be detected by bears from great distances.”