Bears Are on the Prowl in Vermont 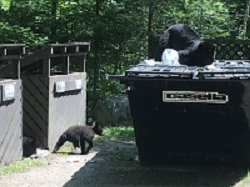 MONTPELIER, Vt. – Black bears have awakened from their winter slumber and are once again roaming the landscape looking for food. Vermont Fish & Wildlife is asking the public to help keep Vermont’s bears wild by removing any potential food sources that would cause them to associate people with food.

This spring may see a particularly high number of bear-human conflicts, according to Vermont’s lead bear biologist Forrest Hammond.  “Last fall, there were not many wild bear foods out on the landscape due to the natural cycles of the plants that bears feed off of,” said Hammond.  “As a result, bears went into their dens hungrier than usual and, as they get increasingly desperate, may seek human food sources. Before bears become a problem, it is more urgent than ever that Vermonters take steps to avoid attracting them by eliminating potential food sources.”

Vermont State Game Wardens report receiving numerous complaints of bear-human conflicts already this spring, unlike in previous years when they were infrequent until May and June. In one instance in Richmond, multiple attempts were made over several days to stop a bear from killing sheep and destroying property on a farm. Ultimately, the bear needed to be put down.

Residents are required by law to remove bear attractants and are reminded that it is illegal to feed bears in Vermont, even unintentionally. Residents are also prohibited from killing problem bears without first taking extensive nonlethal measures and must first receive authorization from a State Game Warden.

Relocation is generally not an option,” noted Hammond. “It is extremely difficult to relocate a nuisance bear far enough away that it doesn’t return and, sadly, these bears sometimes need to be put down to protect human health.

“A large and healthy bear population is butting up against an increasing number of people who have built houses in the woods, fragmenting bears’ habitat and attracting them with backyard food sources.  The bears are not going to change their behavior so it’s up to us to make the change.”