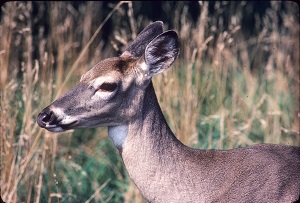 MONTPELIER, Vt. -- Canadian officials confirmed on September 14 the first positive case of Chronic Wasting Disease (CWD) in a captive red deer herd in Quebec province. With the infected deer housed within 100 miles of the Vermont border, wildlife officials expressed concern for its proximity to the state and are carefully monitoring the potential for movement of deer across the border.

The Vermont Fish & Wildlife Department issued a reminder to hunters traveling outside Vermont to hunt--and now particularly to Quebec--that the regulation restricting the importation of deer and elk carcasses, which is designed to protect Vermont's wild deer from chronic wasting disease, remains in effect and will be fully enforced.

Chronic wasting disease (CWD) is a fatal disease of the brain and nervous system in deer and elk.  Abnormal prion proteins produce lesions in the brain that cause disorientation and emaciation in conjunction with other abnormal behaviors.  For the latest information on CWD, check these websites:   www.vtfishandwildlife.com and www.cwd-info.org.

Hunters are also reminded that it is illegal to use deer urine lures in Vermont.  Urine lures were banned because of the potential for CWD prion proteins to be introduced to the environment through the bodily fluids of CWD-positive ungulates and then persist in the environment for extended periods of time.

“The Fish and Wildlife Department views CWD as the primary threat to Vermont’s deer herd.  For this reason, Vermont is committed to preventing this disease by regulating the movement of harvested deer into the state as well as being the first state in the Northeast to ban the use of urine-based deer lures.” said Mark Scott, wildlife director.  “We remain dedicated to protecting Vermont’s valuable deer herd for all Vermonters to enjoy.”

“Hunters bringing deer or elk from any of the CWD-listed states or provinces into or through Vermont simply have to get them processed according to the regulation before entering Vermont.”