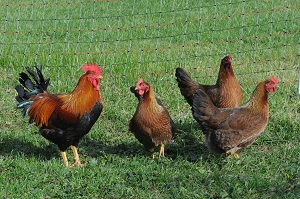 SPRINGFIELD, Vt. – Keeping a small flock of chickens at home to provide eggs and meat has become increasingly popular, but many first-time small-scale poultry farmers are discovering that several species of wildlife like the taste of chicken as much as we do.  The Vermont Fish & Wildlife Department urges poultry owners to use electric fencing and follow other precautions to protect their birds from predation.

“We have had a dramatic increase in the number of complaints of bears, foxes, raccoons, fisher, coyotes, skunks, and bobcats preying on chickens,” said Colonel Jason Batchelder, Vermont’s chief game warden.  “Many of the calls are coming from people who are new at keeping chickens and who do not provide sufficient protection for their birds.”

“Electric net fencing, secure housing and a few other measures can help protect back yard chickens from most wildlife predation,” he added.

Protecting free-ranging chickens is impossible, so Batchelder urges people to keep their birds contained inside electric net fencing and to make sure any wire fencing is secure.  Use of ¼ inch hardware cloth, especially along the bottom of an enclosure will block most small predators.  Weasels can get through a one-inch opening.  The electric netting, however, is good extra protection even outside the wire netting – especially against black bears which are strong enough to break into most unprotected chicken coops.  Several types of electric net fencing are available.  The netting is portable and can easily be used with chicken tractors and other moveable pens.

Batchelder, who has chickens at home, says having your own back yard flock is fun, but that knowing how to protect them is essential for success.