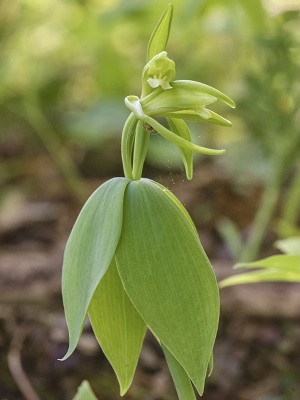 Botanists with the Vermont Fish and Wildlife Department confirmed that a population of small whorled pogonia—believed to be extinct in Vermont since 1902 and listed as threatened under the Federal Endangered Species Act—has been documented on Winooski Valley Park District conservation land in Chittenden County.

“Discovering a viable population of a federally threatened species unknown in our state for over a century is astounding,” said Vermont Fish and Wildlife Department Botanist Bob Popp.  “It’s Vermont’s equivalent of rediscovering the ivory-billed woodpecker.”

The small whorled pogonia is a globally rare orchid historically found across the eastern states and Ontario.  Previous searches for the species in Vermont have been unsuccessful.  As with many orchids, little is understood about the species’ habitat needs.  Populations in Maine and New Hampshire are found in areas of partial sun including forest edges and openings.

“A challenge of locating rare orchid populations for conservation is that so much of where they grow is determined by things we can’t easily see or measure, like networks of fungi in the soil,” said Vermont Fish and Wildlife Department Assistant Botanist Aaron Marcus.  “These kinds of discoveries are only possible because of the vibrant communities of enthusiasts and professional botanists who work together to understand and document Vermont’s plant diversity.”

Marcus says the department was first notified of a possible small whorled pogonia population in Vermont thanks to the observations of two community scientists: John Gange of Shelburne and Tom Doubleday of Colchester.

“John is a passionate and skilled botanist who specializes in orchids and closely follows the sightings people report on the community science app iNaturalist,” said Marcus.  “John noticed that birder and retired greenhouse manager Tom Doubleday had used iNaturalist to ask for help identifying an unfamiliar wildflower last July and reached out to us with the news that the small whorled pogonia had very likely just been discovered in Vermont.”

Popp, Marcus, Doubleday, and Gange returned to the site together this spring and confirmed the presence of small whorled pogonia, which was in bloom at the time.  Rare orchids are at high risk from illegal collection and accidental trampling by passive visitors, according to Marcus. To protect the pogonia’s location from potential disturbances, Doubleday removed the public coordinates from his post using iNaturalist’s privacy settings.

The department’s next steps will be to work with the Winooski Valley Park District to look for the small whorled pogonia on nearby conservation land and monitor the population to make sure this species has the best possible opportunity to flourish in Vermont’s portion of its native range.

“We’re incredibly fortunate that this small whorled pogonia population is on land protected by the Winooski Valley Park District,” said Popp.  “It speaks to the importance of habitat conservation.  When we conserve a piece of land, we rarely know all the species that are there, but we do know that conserving intact natural communities yields the best odds for supporting Vermont’s biodiversity, from common species to rare ones."