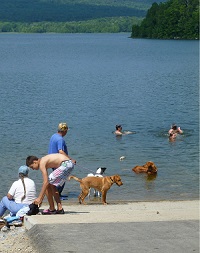 The Vermont Fish & Wildlife Department maintains 196 developed fishing access areas on lakes and rivers throughout the state.  These areas have allowed uses determined by law, and swimming is not one of them.

Fish & Wildlife regulations prohibit certain uses of fishing access areas including, but not limited to -- swimming, littering, camping, picnicking, making a fire, parking of vehicles not related to priority uses, and commercial activity.

Vermont game wardens often respond to incidents involving people swimming at fishing access areas.  In some cases people, including children, are swimming right at the boat ramps while boats were being launched, risking injury or preventing the launching of boats.