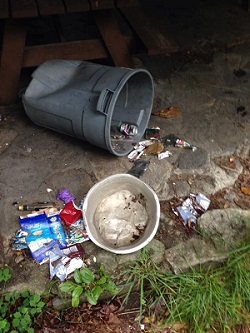 MONTPELIER, VT – Conflicts between people and Vermont’s healthy bear population are becoming more common and Vermont State Game Wardens and biologists have been busy fielding calls from the public.  Reports of bears frequenting human areas have been on the rise this summer, especially in the towns of Middlebury, East Montpelier, Lyndonville, Waterbury, Duxbury, Bolton, Killington, Richmond, and Addison.

According to Vermont Fish and Wildlife bear biologist Forrest Hammond, black bears are naturally skittish, but lose their fear of people as they begin to associate human areas with food rewards. Allowing bears to feed off backyard birdseed, garbage, livestock, and beehives causes them to get overly comfortable around humans, which often leads to negative consequences for the bear.

“Once a bear is conditioned to associate people with food, little can be done to fix the problem because relocating bears is rarely effective. Sadly, food-conditioned bears may need to be put down to protect human safety,” said Hammond.  “The best thing we can do is to change our behavior and ensure that bears don’t have easy access to human foods so they don’t become a problem in the first place.”

Bears are attracted to neighborhoods where they can find easy food in the form of bird seed and garbage, but they have no interest in interacting with people.  The most important thing to do when seeing a bear is to scare it with loud noise from a safe distance so that it associates back yards with negative experiences and remains in the wild. If a bear doesn’t flee from the noise, it has likely already been rewarded with food. It is critical to make sure these bears have no reason to return by removing all food attractants.

Here are a few tips to help keep bears wild:

People can report bear conflicts to at: anrweb.vt.gov/FWD/FW/WildlifeBearReport.aspx. The Vermont Fish & Wildlife Department uses this information to identify hotspots of human-bear conflicts, to monitor the severity of conflicts, and to give advice to residents on avoiding further conflict with bears.

Although it is extremely rare for a black bear to attack a human, bears are wild animals and should never be approached. When there is a bear physically present, it is best to bring children and pets inside. However, reports of bear sightings in the area should not deter people from enjoying time outdoors or from allowing children to play outside.

Although the large number of reports may make us believe that Vermont is being overrun with problem bears a relatively small number of bears are responsible for most of the reports.  A single bear can travel more than five miles in a night and along the way visit dozens of backyards in a relatively short period of time.  A bear that is being fed may not pose a problem for the people feeding it, but it can cause property damage or problems to other neighbor’s homes.

“We are lucky to live in a place like Vermont where we have healthy populations of bears and other wildlife that are so enjoyable to see in the wild,” said Hammond.  “By working together to minimize human-bear conflicts, we can ensure Vermont’s bears remain healthy and wild.”

Remember: A fed bear is a dead bear.