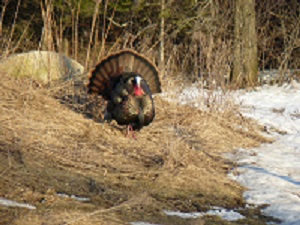 A preliminary report from Vermont Fish and Wildlife shows that hunters brought home 6,136 wild turkeys during 2020, including 627 turkeys taken during the April youth weekend hunt, a total of 4,791 gobblers taken during the regular spring season, and 718 birds during the fall.

“Although 2020 will undoubtedly be remembered as the year of many challenges, at least one thing remained the same – Vermont hunters took to the woods to enjoy some restorative time afield and were again rewarded for their efforts,” said Vermont Fish and Wildlife turkey biologist Chris Bernier.  “Second only to 2010, a near record number of turkey licenses were sold during 2020, resulting in an impressive turkey harvest that closely tracked the average harvest reported over the past ten years.”

“The 6,136 turkeys represent an estimated 140,000 servings of locally sourced, free-range, wild turkey meat as well as countless memories and an enduring connection to the land,” added Bernier.

Turkeys were hunted statewide and were harvested in 241 of Vermont’s 255 towns.  The northern Lake Champlain Valley and the Connecticut River Valley continued to be productive regions for turkey hunters with the highest harvests again recorded in these parts of the state.

“Vermont’s long history of careful and considerate management of wild turkeys has positioned us to maximize the benefits we all receive from this remarkable bird.  Beyond the simple enjoyment and sustenance people get from watching and hunting wild turkeys, these birds play a critical role in the environment as an important prey item and influence the populations of many other species.”

Conservation of wild turkey habitat continues to play a key role in the health and vitality of their population.  Bernier notes that a patchwork of fields and forests provide most of what a turkey needs to survive.   He says the efforts to protect and manage habitat by private landowners and volunteer-based conservation groups like the National Wild Turkey Federation help ensure Vermont has a sustainable and abundant wild turkey population for the future.

Everyone can help support conservation and good habitat for wild turkeys and other wildlife on state Wildlife Management Areas by purchasing the 2021 Vermont Habitat Stamp at www.vtfishandwildlife.com.