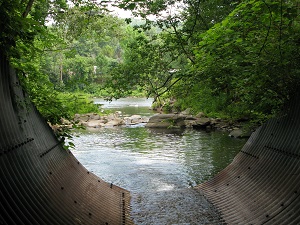 A long and steep culvert in Pomfret between the mainstem White River and Mill Brook may soon be slow enough for trout and turtles to safely travel up. Vermont Fish & Wildlife Department is partnering with the White River Partnership, U.S. Fish & Wildlife Service (USFWS), and the Greater Upper Valley Chapter of Trout Unlimited on an experimental design to retrofit this culvert to enhance aquatic organism passage. The work is being supported in part by donations for the month of the May to the Vermont Habitat Stamp.

“Wild populations of brook and rainbow trout once migrated between spawning and nursery areas in Mill Brook and rearing areas in the mainstem White River,” notes Will Eldridge, habitat biologist, Vermont Fish & Wildlife Department. “But in recent times, a steep 15-foot-wide, 185-foot-long, corrugated metal pipe culvert has prevented fish and other river-based species from being able to move upstream from the White River into Mill Brook.”

One solution, says Eldridge, is retrofitting the culvert with baffles to create a series of steps and pools which fish and other organisms can navigate more easily. Previous attempts to install rigid baffles within this culvert have improved passage temporarily, but the designs have all failed eventually, most recently in 2014.

“We are planning to experiment with a new flexible baffle design that would bend but not break under the large boulders and ice flows that frequently move through the culvert,” says Eldridge. “The rubber material should allow for many years of continued service and be more cost-effective to buy and install than a rigid baffle.”

The flexible baffles will be installed this summer through a coordinated effort by volunteers from White River Partnership, USFWS, and Trout Unlimited volunteers.

“We’re very excited about trying out this new baffle,” says Greg Russ, project manager from White River Partnership. “It was developed in New Zealand and has been used only a few times in the U.S. We’re waiting to see if it succeeds as a long-term solution for restoring passage in Mill Brook; if it does, everyone working on road and stream infrastructure in Vermont and elsewhere in the country will be eager to adopt it.”

Eldridge agrees. “While we’re all hopeful the experiment will lead to better tools for retrofitting culverts, the fish and aquatic organisms that can soon travel up streams like Mill Brook will be the biggest winners.”

The Vermont Habitat Stamp was created by the Vermont Fish & Wildlife Department in 2015 to help protect Vermont’s wild places. To learn more about the stamp, the projects it supports, or to donate online, see www.vthabitatstamp.com