Leave Native Turtles in the Wild 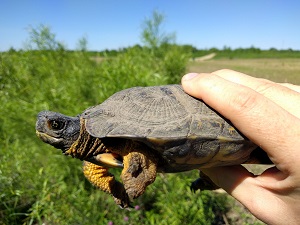 Each year, Vermonters encounter native turtles in the wild or crossing roadways, and some folks illegally bring them home as pets, but rarely does this story have a happy ending, according to the Vermont Fish and Wildlife Department.

Some turtles grow large and others require more complicated care than their owners realize.  Turtles kept indoors require full-spectrum lighting for healthy shell development.  And with some turtles living 50 years or longer, owners often grow tired of caring for them and surrender them to a captive care facility or release them into the wild.

To protect native populations, pet turtles that can no longer be cared for should be rehomed to a captive care facility.  Few of these facilities exist in Vermont, and both in-state and out-of-state facilities have limited capacity and often do not accept turtles.

“Capturing a native turtle and keeping it as a pet is not only bad for that individual turtle but it also could be detrimental to the native turtle population, said Vermont Fish and Wildlife herpetologist Luke Groff.  “Releasing captive turtles back into the wild could introduce or spread wildlife diseases and disrupt the genetic diversity of local turtle populations.

“Turtles are slow to develop, especially those living at northern latitudes where the growing season is short,” added Groff.  “Many of Vermont’s turtle species do not reproduce until they are 10 years of age or older, and most turtle hatchlings never live this long.  Older, sexually mature females are critically important for the long-term prosperity of some turtle populations.  The loss of even a single sexually mature female can have serious consequences.”

So if you see some of Vermont’s native turtles in the wild or move one off the road safely in the direction it is traveling, feel free to take a photo home with you, but leave the turtles in the wild.  And, you can also submit a report to the Vermont Reptile and Amphibian Atlas https://www.vtherpatlas.org/