Living with Wildlife: Bats in Your House? 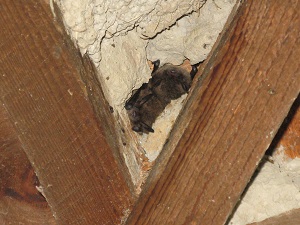 Bat are everywhere!  It may feel that way to some of Vermont’s human residents.  Summer is when some species of bats gather in colonies, to raise their young in human-made structures such as houses, barns, office buildings, and bat houses but fall is the safe time to get them out.

“Summer is the time of year when the greatest number of unwanted bat-human interactions are reported,” according to Vermont Fish and Wildlife’s Small Mammals Biologist Alyssa Bennett, who works on the conservation and recovery of Vermont’s threatened and endangered bat species.

“Bats can end up in your living space for many reasons, including young bats that are weak, disoriented or lost while coming and going from the roost, bats moving within a structure to find warmer or cooler roosting space as temperatures fluctuate, and bats being displaced from their roosts due to building repairs and renovations.”

Although this happens every year, it can come as quite a shock to those who wake up to a bat flying in their bedroom or suddenly uncover a dozen bats roosting behind a rotting trim board being removed on the outside of a home.  But don’t fear, because there are answers to your burning bat questions at www.vtfishandwildlife.com using the search term “bats.”

Living with wildlife means considering the health and wellbeing of both the public and these fragile wildlife species.  Although rarely detected in the general bat population, rabies is a deadly disease and should be taken very seriously.  If you are concerned that you have been in direct contact with a bat, have found a bat in a bedroom while sleeping or in a room with an unattended child, a pet, a person with a cognitive disability, or an intoxicated person, please call the Rabies Hotline at 800-4RABIES (1-800-472-2437).  If the hotline staff and or your health care providers determine there is no concern for rabies exposure, the bat can safely be released outside.

Instructions for safely capturing, containing, and releasing a bat found inside can be found at www.vtfishandwildlife.com, including a demonstration video.

“Living with wildlife doesn’t mean that we have to share our homes with bats in order to protect them,” says Bennett.  “Our main concerns are avoiding human contact by safeguarding the living space, evicting bats from structures safely, and providing alternative habitat for displaced bats.”

Bat colonies are starting to disperse now that young bats can fly.  Fall is a good time of year to think about safely evicting bats from structures where they are not wanted by following the Vermont Fish and Wildlife Department’s Best Management Practices.  These practices are available on Fish and Wildlife’s website or by calling 802-353-4818 or emailing Alyssa.Bennett@vermont.gov, where you can also obtain a list of professionals who perform safe evictions.

Large colonies of bats living in structures can also be reported on the department’s website to help find rare colonies of endangered little brown bats, which are eligible for free bat houses.