Michael Scott is Vermont’s Warden of the Year 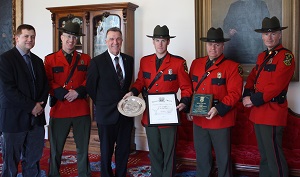 MONTPELIER, Vt. – Michael Scott of Barton is Vermont's State Game Warden of the Year.  A game warden since 2014, Scott received the award in recognition of his excellent service from Governor Phil Scott on May 23 in Montpelier.

"I want to thank Michael for his outstanding performance in protecting Vermont's fish and wildlife resources and serving the people of Vermont," said Governor Scott.  He added that Warden Scott was chosen for “his professionalism, his strong work ethic and because he is highly liked and respected by the people who live in his area, including the teachers and students in local schools he has visited.”

“Warden Scott effectively enforces hunting, fishing and trapping laws,” said Fish & Wildlife Commissioner Louis Porter, “and in 2017 he arrested the offender in the notorious ‘moose dragging’ case in which a violator shot and killed a lactating cow moose, likely orphaning her calf, and dragging the carcass 12 miles behind his truck -- leaving it to waste beside the road.  This case drew national attention and, as a result, the largest monetary donation to Vermont’s “Operation Game Thief” in history.”

Warden Scott previously was honored for his heroism in attempting to save the life of an angler who had fallen through the ice on Lake Willoughby and drowned.  Scott ran across thin ice with a rescue line before breaking in himself and held the angler while bystanders pulled them to shore.

Shikar-Safari Club International, a private wildlife conservation group, sponsors a warden of the year award in each state and Canadian province to help promote and encourage the enforcement of wildlife conservation laws.  Scott received a colorful framed certificate honoring his selection as Vermont’s State Game Warden of the Year, provided by Shikar-Safari Club International.