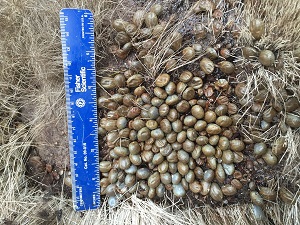 A hunt limited to taking about 33 moose in Vermont’s Wildlife Management Unit (WMU) E in the northeastern corner of the state is proposed in order to reduce the impact of winter ticks on the moose population.

“Moose density in WMU E is more than one moose per square mile, significantly higher than any other part of the state,” said Nick Fortin, Vermont Fish and Wildlife’s biologist in charge of the moose project.  “Moose densities greater than one per square mile support high numbers of winter ticks which negatively impact moose health and survival.”

The department would issue 55 either-sex moose hunting permits in WMU-E for the moose seasons this October, which would result in an estimated harvest of 21 bulls, 10 cows and 2 calves.

“This permit recommendation is a conservative first step to addressing winter tick impacts on moose in WMU-E,” added Fortin.  “Given the poor health of the moose population in that area and a clearly identified cause, we need to take action to address this issue.  Without intervention to reduce the moose population, high tick loads will continue to impact the health of moose in that region for many years.”

The 2020 Moose Season Recommendation and information about the moose study are available on Vermont Fish and Wildlife’s website at www.vtfishandwildlife.com.  Comments may be sent to ANR.FWPublicComment@vermont.gov