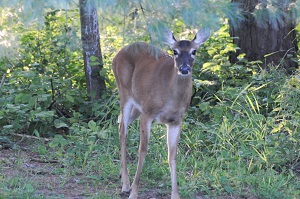 Vermont’s muzzleloader season antlerless deer permit applications are now available on Vermont Fish & Wildlife’s website (www.vtfishandwildlife.com).  A link to the information and online applications is on the home page.

The Fish and Wildlife Board met on May 22 and set antlerless deer permit numbers for the fall deer hunting seasons.

The December 7-15 muzzleloader season would have 23,000 antlerless permits distributed in 18 of Vermont’s 21 WMUs, which is estimated to result in 3,541 antlerless deer being taken.

“The winter of 2019 was severe in central and northeastern Vermont, and in response the permit allocation is 51 percent less than 2018 in those areas,” said Nick Fortin, deer project leader for the Fish and Wildlife Department.  “Elsewhere, the permit allocation is similar to 2018 as little change is expected in the deer population in those areas.”

The deadline to apply for a muzzleloader antlerless deer permit is August 14.