Nesting Loons Have a Record Year 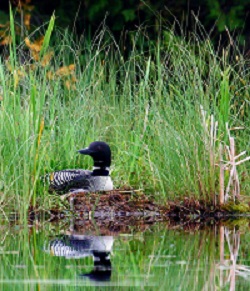 Vermont’s loons are thriving with a record 101 nesting pairs recorded statewide in 2019, the highest since loon monitoring began in 1978, according to the Vermont Fish and Wildlife Department and Vermont Center for Ecostudies (VCE).

“Seventy-five of the loon nests successfully produced 115 chicks this year,” said wildlife biologist Eric Hanson with VCE.  “Although there were losses, 87 chicks survived through August which exceeded the past five-year average survival of 73 percent.”

VCE leads the Vermont Loon Conservation Project in partnership with the Vermont Fish and Wildlife Department.

“We are very grateful to Eric Hanson and the many volunteers who help monitor Vermont’s nesting loons,” said Fish and Wildlife’s bird biologist Doug Morin.  “The loon has been the flagship species of our nongame work since the nongame tax checkoff and conservation license plate programs began to help fund these efforts.”

Loons were removed from Vermont’s endangered species list in 2005 following decades of recovery efforts.  One of the main threats still facing loons as they continue to recover is human disturbance during the breeding season.

“Many areas where loons are nesting on Vermont’s lakes are surrounded by signs reminding people to give loons the space they need, but not all nesting areas are marked,” said Morin.  “We ask people to enjoy loons from a distance, whether they are in a motorboat, a canoe or a kayak.”

Morin also reminds people to avoid lead fishing tackle.  Loons sometimes swallow stray fishing tackle and suffer the effects of lead poisoning.  Lead sinkers weighing one-half ounce or less are prohibited for fishing in Vermont.  And, he recommends that anglers be careful to not attract loons to their bait and lures, and especially don’t leave any fishing line behind as fishing tackle does kill loons.