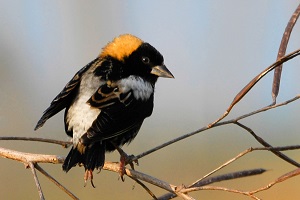 Bobolinks, Savannah sparrows and eastern meadowlarks enrich our summers with their songs, but some of these species are in decline due to the loss of appropriate grassland habitat.

Landowners can make a difference by altering the times of year they mow fields.  The Vermont Fish and Wildlife Department is encouraging landowners to help these beloved species by waiting a little longer to mow to give these birds a chance to complete their nesting season.

“People maintain fields and meadows in Vermont for a variety of reasons, from commercial hayfields and grazing pastures, to simple scenic beauty,” said Doug Morin, biologist for the Vermont Fish and Wildlife Department.  “Mowing is the most common way to maintain grasses, but if mowed early in the summer, grassland birds will lose their nests and chicks."

Bobolinks build nests among the grasses and wildflowers of fields and meadows.  When bobolinks are present, other grassland bird species such as Savannah sparrows and grasshopper sparrows, may also be nesting among the grasses.  Deer fawns, wild turkey chicks, and other animals take refuge in the grass and are also at risk by mowing too early.

According to Morin, landowners who mow their fields for aesthetic reasons can maintain these fields and accommodate nesting birds simply by cutting later in the summer, preferably after August 1.