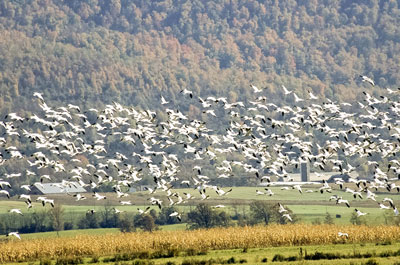 Vermont’s spring snow goose hunt will be held from March 11 through April 26.

Since 2009, the U.S. Fish and Wildlife Service has annually issued a “Conservation Order” to allow the reduction of the population of migrating greater and lesser snow geese as well as Ross’ geese.  The numbers of these geese have grown so high that they are destroying habitat for themselves and other species.

The Vermont 2019 Spring Snow Goose Conservation Order will occur statewide.  The daily bag limit is 15 snow geese, and there is no possession limit.  Waterfowl hunting regulations in effect last fall will apply during the 2019 Spring Snow Goose Conservation Order with the exception that unplugged shotguns and electronic calls may be used and shooting hours will be extended until one half hour after sunset.

A 2019 Spring Snow Goose Harvest Permit is required and is available at no charge on the Vermont Fish & Wildlife Department’s website at https://vtfishandwildlife.com/hunt.  Hunters may also call the Essex Junction Office (802-878-1564) to request a permit.

Hunters can register with the Harvest Information Program by going to the Vermont Fish & Wildlife Department website or by calling toll free 1-877-306-7091.

Hunters who obtain a permit will be required to complete an online survey after April 12 and prior to May 23, 2019, whether they hunted or not.  Hunters without access to the internet may obtain a copy of the survey by calling 802-878-1564.

“The breeding population of greater snow geese has grown from approximately 50,000 birds in the mid-1960s to 877,000 birds today,” said David Sausville, Vermont’s waterfowl project biologist.  “This increase has resulted in damage to agricultural crops and marsh vegetation in staging and wintering areas from Quebec to North Carolina.  The Atlantic Flyway has established a goal of 500,000 greater snow geese to bring populations in balance with their habitat and reduce crop depredation.”

During spring migration, snow geese typically move through the Champlain Valley in late March and early April.  They usually pass through Vermont fairly quickly in route to their spring staging areas along the St. Lawrence River Valley.  They remain there for about a month before moving on to their nesting areas in the Eastern Canadian Arctic.