The Climbing Fern is Back in Vermont 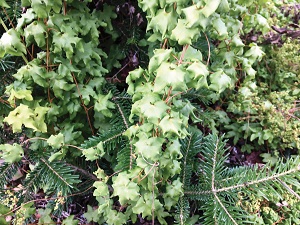 Last observed in Vermont in 1997, the climbing fern has been spotted again growing in the Northeast Kingdom, according to Vermont Fish & Wildlife’s botanist Bob Popp.

Considered extirpated in the state, the climbing fern (Lygodium palmatum), was confirmed by botanist Art Gilman along a VELCO-owned powerline. Powerlines in Vermont can be hotspots for rare, threatened, and endangered plants, and VELCO is working with botanists to conserve the fern.

Climbing fern typically grows a few feet tall in open boggy areas and is the only species of fern found in the Northeast that is a vine. Though the species is considered apparently secure globally, climbing fern is uncommon in states where it occurs, from Florida to New Hampshire, with only 48 known populations in New England. It is rare in northern New England and while this patch may have been there all along, it is possible that it is moving north in response to climate change.

The climbing fern was one of several historically documented species that were rediscovered in Vermont this year.

“We have been finding larger numbers of long-missing plant species in the last few years,” said Popp. “This is largely due to the work of an increased number of volunteers and professional botanists who are allowing us to search more areas of Vermont than in the past.”