Travis Buttle is Vermont’s Warden of the Year 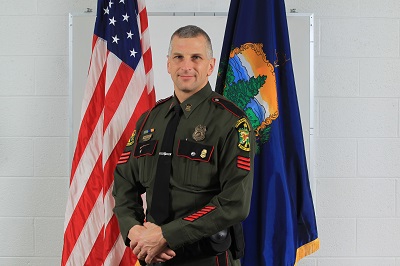 State Game Warden Sergeant Travis Buttle of Shaftsbury is Vermont's Game Warden of the Year.  A game warden since 1996, Buttle was nominated by his peers and received the award in recognition of his excellent service.

"I want to thank Travis for his outstanding performance in protecting Vermont's fish and wildlife resources and serving the people of Vermont," said Vermont Fish and Wildlife Commissioner Louis Porter.  “Sergeant Buttle was chosen for his integrity, professionalism and high motivation in all of his work duties, and because he has earned respect from other wardens and the public.”

“This nomination by Sergeant Buttle’s peers is in recognition of his outstanding work ethic, his ability to conduct thorough investigations, his building of community support for fish and wildlife enforcement while acting as the department’s spokesperson in his community, and for providing training to the Vermont Law Enforcement community at large,” said Colonel Jason Batchelder, Vermont’s chief game warden.

“Sergeant Buttle has been in the Southern District for 24 years, assigned to the Bennington District for that entire time.  He is a reliable and dependable warden and a fair and impartial investigator who serves with distinction on a regular basis.  Travis is a prime example of a community-oriented law enforcement officer who is empathetic, courteous, professional, and responsive to the public.”