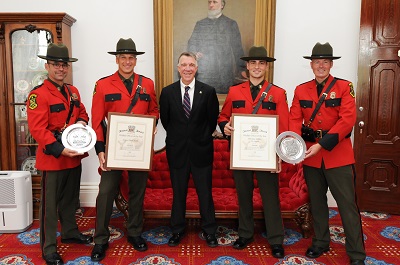 A game warden since 2016, Asa Sargent received the award for his high motivation and effort, positive attitude, public outreach achievements, and outstanding casework resulting in a 100 percent conviction rate as of 2019.  He is a certified Wilderness First Responder assisting in remote search and rescue operations.

Sergeant Travis Buttle has been a warden in the Bennington area for 24 years and is recognized as a diligent and effective protector of Vermont’s natural resources, handling more than 300 cases in 2020.  In addition, he was recognized for his public outreach achievements, courteous and responsive professional demeanor, and his valued contributions in remote search and rescue operations.

In one instance Travis responded to a call of a lost autistic boy using his knowledge of behavior and local topography to locate the individual and return him to his family.  In another example a missing deer hunter was lost on a rainy, cold November night.  Travis was called out after his regular shift and responded to the command post, assisting the Vermont State Police with planning and executing the successful search and rescue.

"I want to thank both wardens for their outstanding efforts to protect Vermont's fish and wildlife resources and to serve the people of Vermont," said Governor Scott.  “Wardens Sargent and Buttle were chosen for their integrity, professionalism and commitment, and they have earned respect from other wardens and the public.  These awards are very well-deserved.”

“Asa Sargent and Travis Buttle are consummate professionals who effectively and fairly enforce hunting, fishing and trapping laws,” said Fish and Wildlife Commissioner Louis Porter.  “They are great role models for our younger wardens who have joined us in recent years.”