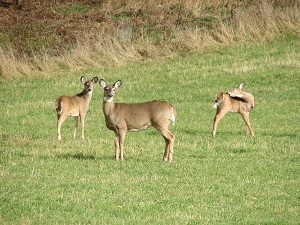 In Vermont a hunter may take up to three deer in a calendar year in any combination of seasons (Archery, Youth Weekend, November Rifle Season, December Muzzleloader).  Of these, only two may be legal bucks, and only one buck may be taken in each season.  A “legal buck” is a deer with at least one antler having two or more points one inch or longer.  All three deer in the annual bag limit may be antlerless deer.

Hunters must have a standard hunting license in order to purchase an add-on archery deer hunting license, except that nonresidents may purchase an "archery only deer license" costing $75.  Licenses may be quickly and easily purchased on Fish & Wildlife’s website (www.vtfishandwildlife.com).

Hunters planning a Vermont archery deer hunting trip should download a copy of the 2017 White-tailed Deer Harvest Report from Fish & Wildlife’s website.  It has the number of deer taken in each town in last year’s deer hunting seasons.  Hunters took 3,578 deer during the 2017 archery season, and the average of the last three years is 3,481.

For more information and a summary of regulations, download the 2018 Deer Season Guide on Vermont Fish & Wildlife’s website.  For more help, Email (fwinformation@vermont.gov) or call 802-828-1000.