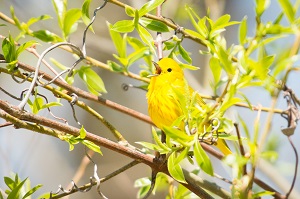 Vermont is a wildlife viewing showcase.  With a variety of habitats for wildlife to choose from, Vermont contains vast green woods, bogs straight out of a fairy tale, and even alpine tundra on top of its highest peaks. The state is an avian crossroads, where snowy owls spend the winter and magnolia warblers spend the summer. From birds singing to moose bugling to fish jumping, here are Vermont’s premiere wildlife watching opportunities.

Get splashed by trout jumping up Willoughby Falls

Each spring, steelhead rainbow trout begin their arduous expedition up the Northeast Kingdom’s Willoughby River and run into Willoughby Falls, a rocky cascade near downtown Orleans. The pools in the cascade become overrun with large adult steelhead that occasionally leave the water and take to the air as they attempt to leap over fast areas of current in the falls.  These aerial displays offer lucky viewers the opportunity to see these beautiful, powerful fish up close. The extraordinary spectacle typically happens at mid-day in late April to early May.

No harbinger of spring is more distinctive than the sound of the birds singing in the forest. Whether it’s the flute-like song of our state bird the hermit thrush or the trills and beeps of a song sparrow, the forests and fields of Vermont become awash with music each spring. Any green space from April through June is likely to have birds singing in the early morning hours.  The area along Lake Champlain can be particularly good for spring songbirds, and can be accessed via several state parks or wildlife management areas.

On seasonally warm, foggy, rainy spring nights, the calls of frogs can be nearly deafening in Vermont. The spring peepers enter first each year with their soprano notes and are quickly joined by gray treefrogs on alto, wood frogs on tenor, green frogs on baritone, and eventually by the summer bass notes of bull frogs. Frogs start chorusing each year on the first moist spring nights that hover close to 40 degrees, which usually occurs in March or April. Wander around your neighborhood or head into some local woods with a flashlight and seek out ponds, wetlands and other low-lying areas that frogs congregate to get a front-row seat at the show.

Haunting, eerie and unforgettable, the call of the loon may be the quintessential sound of Vermont’s waters. While it may be relatively common now, not too long ago these waters were silent, as loons were on the brink of becoming extinct in the Green Mountain State. Fortunately, loon populations have started to rebound thanks to efforts from conservationists, but wildlife watchers should still take care not to disturb them during nesting season. Loon locations vary from year to year, but any large Vermont lake or pond surrounded by wilderness is likely to have loons calling during the summer months, particularly around sunrise and sunset.

The 6,729-acre Missisquoi National Wildlife Refuge at the mouth of the Missisquoi River on northeastern Lake Champlain is truly a wildlife-viewing treasure. And after a short trip down the Missisquoi, it’s easy to see why the refuge is so special.  Paddlers will likely see a variety of wildlife including herons, wood ducks, red-winged blackbirds, beaver, and otters and may even catch a glimpse of a bugling moose or a rare spiny softshell turtle. The refuge also hosts an incredible diversity of habitats, including bogs and floodplain forests. The best way to see the refuge is by paddling the Missisquoi River starting at Louie’s Landing. Check in at the refuge visitor center or online for seasonal closures enacted to protect sensitive nesting sites.

Spot a migrating hawk from atop Mt. Philo

Hawks are well known for their incredible eyesight, but a good pair of binoculars or even a spotting scope can level the playing field for birdwatchers when scanning for incoming raptors. One especially good place to view hawks is Mt. Philo State Park located in Charlotte from September through November, particularly on clear, warm autumn days. Birdwatchers may see just about every type of hawk, owl and eagle in the region, which can start as just a distant speck on the horizon before whizzing overhead and streaking away again into the distance. A short hike or drive up to the 968-foot Mt. Philo summit gives a broad view of the Champlain Valley and the Adirondacks in the distance.

Witness the multitude of colors on waterfowl in Addison County

Addison County in the western part of the state contains a birders’ paradise, Dead Creek Wildlife Management Area, where all types of birds can be spotted types – marshbirds, shorebirds, hawks, owls, woodpeckers, and songbirds all frequent the area. But the ducks and geese truly capture the attention of birders at Dead Creek. From the exquisitely colored plumage of the wood duck, to the elusive flashes of color on mallards and teal, to the deep shading of ring-necked ducks and hooded mergansers, Dead Creek’s waterfowl display spectacular colors. The best places to view waterfowl are in the ponds next to the Route 17 viewing area and from Brilyea Road along the refuge, where ducks swim among the cattails and rest on logs. The birds are most abundant in the spring and fall and, as with all birding, sunrise and sunset are the best times to go.

There may be no greater trophy for a wildlife-watcher than capturing a photo of a rutting bull moose calling for cows in the autumn mist.  The best places to look for moose in Vermont are in the bogs and wetlands of the Northeast Kingdom, particularly at West Mountain, Wenlock, and Victory Basin wildlife management areas, as well as the Conte National Wildlife Refuge. Moose are often spotted at salty bogs along Route 114 between East Burke and Canaan and Route 105 from Island Pond to Bloomfield. There is also a moose viewing platform at the junction of Route 105 and Notch Pond Road in Brunswick.

Every fall, visitors to Dead Creek Wildlife Management Area get to experience one of the most magnificent gatherings of wildlife in North America – the famous snow goose and Canada goose migration. The geese turn the sky gray and white during their remarkable 5,000-mile journey from the Arctic tundra. They flock by the thousands, taking over the wetlands and cornfields around Dead Creek to rest and refuel. The geese are best viewed flying around and feeding during the first hours after sunrise and the last hours before sunset. They usually stop through between October and November.

Join in the Christmas bird count

The Christmas bird count is a tradition of censusing birds throughout North America in their wintering locations.  The tradition dates back to Christmases in the 19th century and now is a bird-watching endeavor critical for conservation researchers tracking bird numbers and locations. The Christmas bird count is a bit of a misnomer, as groups actually count birds between mid-December and early January. Audubon Vermont hosts the annual count and welcomes birders of all ability levels. Volunteer to contribute to this very important survey and meet some local birders along the way.

For more information on places to watch wildlife, see vtfishandwildlife.com and search for “watch wildlife” or check out a wildlife management area near you.

Photos and article by Tom Rogers