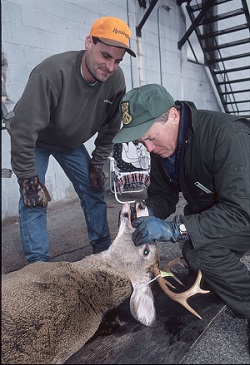 Hunters are gearing up for the start of Vermont’s traditionally popular 16-day rifle deer season that begins Saturday, November 16 and ends Sunday, December 1.

“The greatest numbers of deer continue to be in the southwestern and northwestern regions of the state,” said Deer Project Leader Nick Fortin. “The Green Mountains and Northeast Kingdom offer more of a big woods experience, with fewer, but often larger, deer.”

Vermont’s regular hunting licenses, including a November rifle season buck tag and a late season bear tag (for Nov. 16-24), cost $26 for residents and $100 for nonresidents.  Hunters under 18 years of age get a break at $8 for residents and $25 for nonresidents.  Licenses are available on Fish & Wildlife’s web site and from license agents statewide.

A 2019 Vermont Deer Hunting Guide can be downloaded from the department’s website at www.vtfishandwildlife.com.  The guide includes a map of the Wildlife Management Units (WMUs), season dates, regulations, and other helpful information.

Biologists are collecting middle incisor teeth from November season deer to help estimate population size, growth rate, health, and mortality rates, and to evaluate regional differences in ages of bucks.  Each tooth will be cross-sectioned to accurately determine the deer’s age, and the results will be posted on the Fish & Wildlife website next spring.

Hunters who don’t make it to a biological reporting station are also asked to provide a tooth from their deer. Obtain a tooth envelope from your regular reporting agent.  Remove one of the middle incisor teeth, being careful to include the root.  Place the tooth in the envelope and give it to the reporting agent.