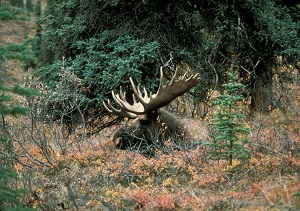 The hunt will be restricted to bull moose in Wildlife Management Units E1 and E2 in the northeastern corner of the state where the Fish & Wildlife Department recommends the moose population be maintained at its current level to reduce the effects of winter ticks.  The department expects only nine to ten moose to be taken.  The small number of bulls-only permits is not expected to have any impact on Vermont’s moose population.

No regular public lottery will be held.  People who have moose hunting bonus points from previous years will have those points “frozen” so that they may be used in future years.

The special priority drawing for five permits for Vermont military veterans will occur on August 1.  Veterans may apply at no cost starting on April 30 on Fish & Wildlife’s website (www.vtfishandwildlife.com) or by mailing downloaded applications.  The deadline to apply is July 6.  Veteran permit recipients may hunt only in the October 20-25 season.  Veterans who have bonus points from previous years must apply in the veteran lottery this year in order to preserve their veteran bonus points.  Those who would like to request a paper application or need assistance applying may call the department’s licensing office at 802-828-1190.

Three moose permits will also be available to “Special Opportunity” recipients – people who have life-threatening illnesses and who are sponsored by a qualified charitable organization.  These permit recipients may only hunt in the October 20-25 season. Applications are at no cost and can be received from the department’s licensing office.

Hunters also will have the option to bid on five moose hunting permits in an auction to be announced later.  Proceeds from the auction help fund the department’s conservation education programs.  Auction permit recipients may choose to hunt in either the October 1-7 archery season or the October 20-25 season.

“We are limiting the hunt to the portion of the state where the moose population is stabilizing, and we believe it is in the best interest of moose to keep their density at its current level of one moose per square mile,” said Alexander.  By maintaining moose at this level, research indicates winter ticks will have fewer hosts to feed on.  For the remainder of the state, a no-harvest approach is designed to increase the population.”