Vermont Bear Hunters Had a Record Season in 2019 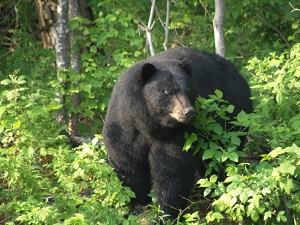 The Vermont Fish and Wildlife Department reports that bear hunters in Vermont had a safe and successful hunting season in 2019.

Preliminary numbers show that hunters took a record 750 black bears during the two-part early and late bear seasons.  The previous highest harvest ever recorded in Vermont was 728 in 2004.  Fish and Wildlife also says there were no hunting-related shooting incidents.

The average number of bears taken over the previous 10 years was 597.  The hunting season results are consistent with the goal of maintaining the bear population to within 4,500 to 6,000 bears, according to Fish and Wildlife’s bear biologist Forrest Hammond.

In 2019, hunters took a majority of the bears, 481, in the early season and only 269 in the late bear season, which overlaps with the November deer season.  Many large bears were reported with 12 weighing over 300 pounds.

Hammond noted that participation in the early bear season has remained high with large numbers of hunters choosing to purchase a $5 early season bear tag.  “Between an abundant population, a long hunting season and the potential of harvesting delicious and nutritious bear meat, Vermonters and visitors are becoming increasingly interested in hunting this big game animal,” said Hammond.

“Fifty years ago Vermont had less than 1,500 bears, and they were found mostly in the mountains and northeastern quarter of the state,” Hammond said.  “Today we have about 5,000 bears in Vermont, and they are found pretty much throughout the state.”

Bear hunters continue to provide information that is valuable for managing the species including bringing their bear into one of 150 game check stations and by completing hunter effort surveys.

Each hunter is required to submit a pre-molar tooth from their bear which will provide information on the age of the animal.  Bear ages will be posted on Fish and Wildlife’s website  in early May.