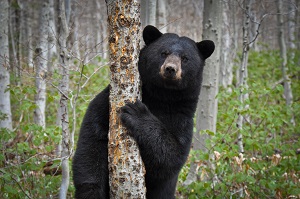 The hunter must field dress the bear before taking it to a reporting station.  It is also legal to skin the bear and cut it up in order to carry it out of the woods.  Although the bear must be reported within 48 hours, Fish & Wildlife urges doing so quickly to cool the meat.  The hunter must also collect and submit a pre-molar tooth from the bear within 48 hours which provides important data on the age structure and size of the bear population.

“Bears will be feeding along power lines and in forest openings and old fields where berries and apples can be found as well as in forested beech and oak stands,” said Vermont’s bear biologist Forrest Hammond.  They also are likely to be feeding on standing corn.”

“Twenty-five years ago Vermont had less than 3,000 bears, and they were found mostly in the mountains and northeastern quarter of the state,” he said.  “Although we have successfully increased bear numbers, the human population has also risen, resulting in more encounters between humans and bears.  Carefully regulated hunting helps control the growth of the black bear population and allows for their sustainable use, while decreasing interactions with humans.”

Hammond says with the bear population so high, this is a great opportunity for hunters who have never hunted bear to do so this year.  He says properly prepared bear meat is highly nutritious and that recipes are readily available on the Internet.  A 2018 Black Bear Hunting Season Guide is available on the Vermont Fish & Wildlife website.

Hammond asks hunters in southern Vermont to avoid shooting bears with yellow ear tags and GPS collars because they are valuable animals in the Deerfield Wind bear study.