Vermont Deer Hunters Had a Good Year in 2018 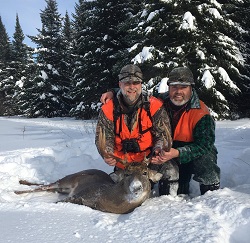 “The legal buck harvest of 9,993 was 8 percent more than the previous three-year average of 9,267, and the second highest buck harvest since 2002,” said deer project leader Nick Fortin.  “Harvest numbers increased during the archery, rifle and muzzleloader seasons.  The muzzleloader harvest of 6,066 is an all-time record.”

“The relatively high harvest was due to several factors.  First, recent mild winters have allowed the deer population to grow throughout Vermont.  Additionally, lack of fall foods caused deer to be more concentrated and snow helped hunters locate them, resulting in increased success.  The department also issued more muzzleloader antlerless deer permits this year to provide more harvest opportunity and to limit population growth or reduce deer numbers in some parts of the state.”

The primary goal of Vermont’s deer management strategy is to keep the deer herd stable, healthy and in balance with available habitat.  “Maintaining an appropriate number of deer on the landscape ensures deer and the habitats that support them remain in good condition and productive,” said Fortin.

Each year the department operates biological check stations during deer hunting seasons to gather information on the age, sex, field-dressed weight, antler characteristics, and overall health of Vermont’s deer herd.  In 2018, biological data were collected from more than 900 deer examined during the two-day youth season and November rifle season.  Hunters also submitted more than 2,700 teeth from bucks harvested during the rifle season, which will provide additional age information.

The 2018 White-tailed Deer Harvest Report with final numbers will be on Vermont Fish & Wildlife’s website (www.vtfishandwildlife.com) in February.