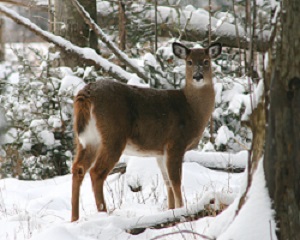 Vermont’s hunters will get one final chance for a deer this year during the muzzleloader deer season and the second part of the archery deer season.  The two seasons run at the same time -- December 1-9.

A legal buck is a deer with at least one antler having two or more points one inch or longer.

An antlerless deer is a deer without antlers or with no antler longer than three inches.

A deer with three-inch or longer spike antlers may not be taken during the archery, November rifle, or muzzleloader seasons.

A muzzleloader or archery license is required in addition to a standard hunting license, except for a nonresident who chooses to purchase just a limited archery license for the archery season.

Vermont hunters may take up to three deer in a calendar year with appropriate licenses and permits for each deer season (archery, youth weekend, November rifle, December muzzleloader).  Only two of the three deer in the annual limit may be legal bucks, but only one legal buck may be taken in each season.