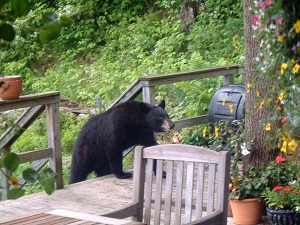 MONTPELIER, Vt. – Black bears have arisen from their winter slumber and are once again roaming the landscape looking for food.  The late spring is delaying the growth of bears’ natural food sources, which is likely contributing to a rise in bear-human conflicts this year according to Vermont Fish & Wildlife bear biologist Forrest Hammond.

Hammond is asking the public to help keep Vermont’s bears wild by removing any potential food sources that would cause them to associate people with food. “Bears will be more attracted to people’s yards than normal this year as they struggle to find foods in the wild,” said Hammond. “This presents an even more urgent need to keep bears and humans safe by removing bird feeders and securing garbage and other potential bear attractants.”

“It is extremely difficult to relocate a bear caught up in human-bear conflicts,” said Hammond.  “Sadly, these bears sometimes need to be put down to protect human health. Our large and healthy bear population is butting up against an increasing number of people who have built houses in the woods, fragmenting bears’ habitat and attracting them with backyard food sources.  The bears are not going to change their behavior so it’s up to us to make the change.”

Residents are required by law to remove bear attractants and are prohibited from killing problem bears without first taking extensive nonlethal measures.