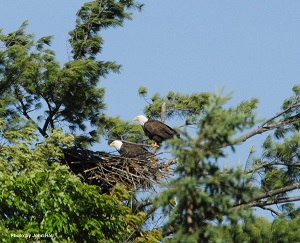 Vermonters with an interest in conserving wildlife should consider donating to the Nongame Wildlife Fund on their state income tax form this tax season.  The fund helps to conserve some of Vermont’s most threatened wildlife species such as bald eagles, lynx, and turtles.

Donations are leveraged by a match from a federal grant, meaning that a $50 donation can bring an additional $150 to wildlife conservation in Vermont.  These donations help conserve declining pollinators such as butterflies or bees which are critically important to agriculture and ecology.

“The Nongame Wildlife Fund has been responsible for some of the greatest conservation success stories in Vermont,” said biologist Steve Parren, who manages nongame wildlife projects for the Vermont Fish & Wildlife Department. “Thanks to generous annual donations by thousands of Vermonters, we are working to restore many of the iconic species of our Green Mountain State.”

Past donations to the Nongame Wildlife Fund have helped recover peregrine falcons, osprey, and loons in Vermont.  “Another conservation success story is on the horizon – bald eagles have been meeting nesting targets that may allow them to be down-listed from endangered to threatened in Vermont,” said Parren. “But there are still many species whose existence in Vermont is imperiled without the continued support of the public.”