Warm Summer Water Temperatures Can Be Lethal to Trout 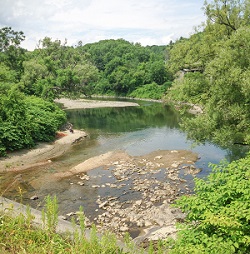 MONTPELIER, Vt –The Vermont Fish & Wildlife Department and the Vermont Council of Trout Unlimited are encouraging anglers to consider their impact on trout when fishing during the current hot, dry weather.

Many of the trout streams and rivers throughout Vermont are currently at or above stressful temperatures for trout and flows in most rivers are already dangerously low.

As a result, officials are recommending that anglers do not fish for trout during extended hot spells if they do not also intend to harvest their catch for a healthy meal of fresh fish.  Instead, consider targeting warmwater fish species such as bass, northern pike, bowfin, or panfish. Anglers who do practice catch-and-release fishing for trout or any other species should remember to take steps such as playing the fish quickly, keeping the fish in the water as much as possible, and releasing the fish without injury to improve the fish’s chances of survival.

Warm water temperatures also serve as a reminder about the importance of naturally vegetated shorelines.

“Maintaining vegetated areas along streams and rivers is critical to provide shade that keeps water cool, even when air temperatures rise,” said Lee Simard, a fisheries biologist with the Vermont Fish & Wildlife Department.  “Allowing trout to move to coldwater areas when the waters warm is also critical to maintain healthy and robust trout populations throughout Vermont.  This is one reason we are constantly working to provide aquatic organism passage by removing dams and replacing impassable culverts.”