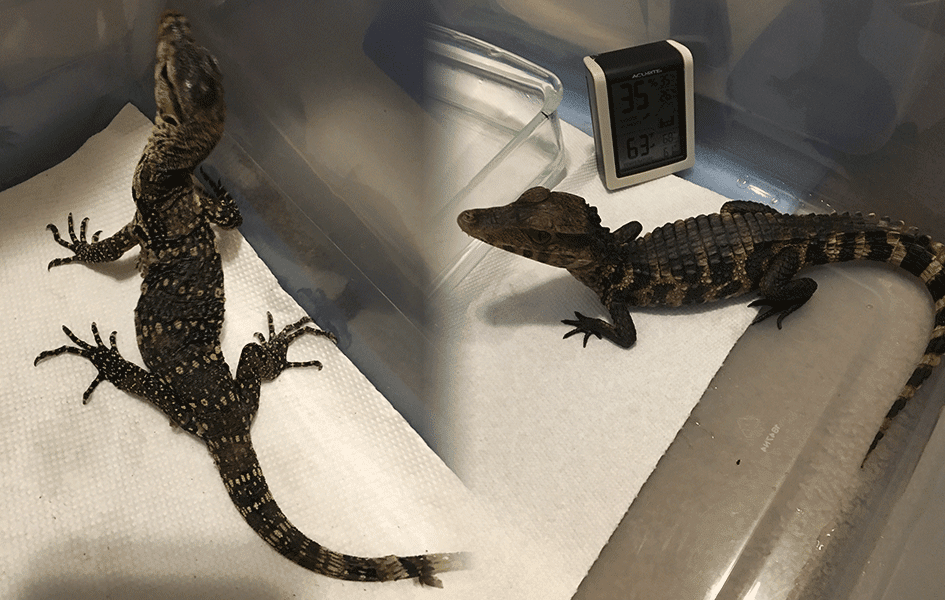 A Westfield man has been charged with a wildlife violation after a water monitor lizard and a dwarf caiman were found on his property.  Raymond J. Barlow, 29, was charged with illegally importing wildlife and faces fines up to $722.

Vermont State Game Wardens received a Facebook photo from a member of the public alerting them to the presence of the illegal reptiles at Barlow’s residence.  They executed a search warrant and seized the reptiles and turned their care over to Rainforest Reptiles, an education and wildlife rehabilitation facility in Massachusetts.

Dwarf caimans are similar to crocodiles and can grow over five feet in length, with heavily armored skin and powerful jaws. Water monitors are the second largest lizard in the world behind the closely-related Komodo dragon. They can weigh over 100 pounds and grow to over six feet in length.  The bite of a water monitor produces rapid and painful swelling.

“Vermont’s wildlife importation laws are in place to protect our local ecosystems and our people,” said Sgt. Chad Barrett, Vermont’s exotic species specialist.  “Exotic species can sometimes quickly establish themselves in a new area, which can devastate local plants and animals that are not used to their presence and are often unable to compete with them.  Additionally, a dangerous species could potentially harm someone if it got loose.”

Limiting the species that can be imported into Vermont also helps prevent them from being stolen out of the wild and their conservation status being threatened by the illegal pet trade. Barrett also cites the movement of exotic species as a source for disease transmission among wildlife populations.  For example, snakes in some parts of New England have been suffering from a newly discovered condition called snake fungal disease, which can infect multiple snake species.