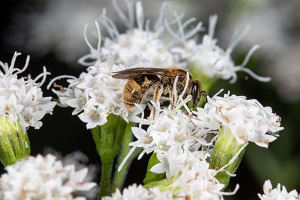 Those with an eye to the outdoors will notice wildlife becomes increasingly active as the weather warms. Our winter resident birds now fill the morning with song, skunks are once again skulking, and even the moths are emerging. As we move into the growing season, one of the most iconic sounds of spring and summer is the soft buzz of insects.

Garnering little notice from humans (except for mosquitoes and garden pests), the insect world is incredibly diverse and boasts more species than any other group of animals. By some estimates, we may have more than 20,000 different types of invertebrates in the state. Worldwide, over two-thirds of species are insects.

Humans enjoy the benefits of many insect products such as honey, silk, and shellac. More important, insects and other invertebrates are among the heavy lifters in keeping nature’s energy cycle churning. Munching and pollinating plants, enriching soil, breaking down rotting logs and animal waste, and keeping each other’s populations in check is just everyday life to these tiny creatures.

The life of an insect is hardly without peril. Many dangers, such as predators and ill weather, are of natural origin and have been surmounted over time through adaptation and evolution. This is, after all, a hardy bunch of animals.

As people dominate the landscape, however, new threats come at a fast pace and often on a large scale. Habitat loss, invasive species, pesticides, and the unbalancing nature of climate change are all bearing down on the invertebrate world. Recent publications have alerted people to a potential catastrophic loss of insects in the near future. While we are not likely to see insects disappear in their entirety, there is reason for concern that more sensitive species will not fare the storm without help.

What is a bug to do?

One of the biggest challenges for conserving insect diversity in Vermont and elsewhere is the lack of baseline data. To determine how well species are doing, we need to know what they are, where they live, and how abundant they are. Fortunately, the Vermont Fish & Wildlife Department and partners have been taking inventory of Vermont’s invertebrate fauna.

A three-year study of our 17 different bumble bees compared recent observations with historical collections, concluding that several species have drastically declined or even disappeared from Vermont, including the Rusty-patched Bumble Bee. A statewide survey of butterflies from 2002 to 2007 cataloged for the first time the 103 species now known in Vermont, as well as four giant silk moths. Twelve of the butterflies were first-time records. The results of this study will be used for comparison with future surveys to identify population trends. One of the more exciting aspects of the butterfly and bumble bee studies was that they enlisted the help of volunteer “citizen scientists” to collect field data.

So, what’s next? Vermont is embarking on a statewide survey of all native bees (not just bumble bees) because of recent concerns for native pollinating insects and the impacts that species losses could have. The Fish & Wildlife Department will again be joining forces with the Vermont Center for Ecostudies and other partners to tackle this large endeavor, with more than 250 bee species that could be observed. Citizen scientists will again be recruited to help catalog distribution and abundance data, offering the public an opportunity to take part in science and insect conservation. The first year (2019) will focus on the bees of Chittenden County. Those interested in participating can contact the Vermont Center for Ecostudies at info@vtecostudies.org or visit http://val.vtecostudies.org/projects/vtbees/. There will be a project workshop for volunteers later this spring.

In the meantime, while you plan your garden, you can start thinking about how you might improve your property to support beneficial insects. Have an empty field that you mow? How about leaving the cutting until mid-October or later so that insects can complete their life cycles? Leave those wildflowers for the bugs; even goldenrods are important to many species. Watch for ground-nesting bees in bare soil patches and leave them undisturbed. Limit your use of insecticides and watch out for any brands that contain neonicotinoids (such as imidacloprid, thiamethoxam, clothianidin), which are absorbed by the entire plant and pose a threat to many bees.  Working together, we can help insects thrive and maintain the many benefits they provide to people and nature.

If you want to help insects and other wildlife, you can purchase an annual Vermont Habitat Stamp at www.vtfishandwildlife.com for $15.  The stamp helps protect and improve important fish and wildlife habitat in Vermont.