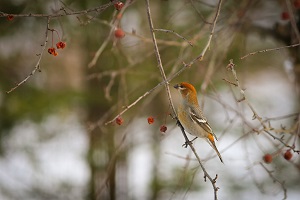 The calendar may say December, but with the cold winds blowing and the snowdrifts piling up, it feels like we’re much later into winter. Vermonters typically take one of three different approaches to winter. Some (usually retired) Vermonters go the ‘snowbird’ approach, spending the winter in a warmer southern climate. Others ‘hibernate,’ staking out a warm spot next to the woodstove with a cup of cocoa, going outside only when absolutely necessary. But hardier Vermonters embrace winter, breaking out the skis or snowshoes, dusting off the sled, and generally reveling in the snow.

Wildlife follow the same three basic strategies to make it through the tough winter months.  From birds that migrate south, to bears that cozy up and snooze the winter away, to moose that stick it out in the cold, wildlife approach winter using familiar tactics.

Birds, like people, don’t employ just a single strategy to get through winter. Many species migrate, but in different directions and at different times. The warblers generally start heading south to the Gulf Coast by August, whereas some ducks and geese may not head south until December, particularly in years where ponds and lakes remain open late.  Loons head east--not south--to spend the winter in the ocean along coastal New England.

Other birds, from up north such as snowy owls, redpolls, rough-legged hawks, or snow buntings, migrate into Vermont.  Additionally, not every member of a bird species will arrive at a single strategy - some individual bald eagles or blue jays stay in Vermont for the winter while others head out of town.  And many of our resident bird species stay close to home, including chickadees, waxwings, nuthatches, juncos, ravens, and woodpeckers.  With more elbow room at the feeder or fruit tree, these year-round residents face less competition for food.

One winged migrator stands out from the rest of the pack: the monarch butterfly.  Monarchs are one of only a small group of butterflies known to engage in, as birds do, a north-south migration, with most eastern monarchs overwintering at a single site in the mountains of central Mexico. But on their return, a monarch that leaves its wintering grounds in Mexico will never make it to Vermont.

According to Mark Ferguson, zoologist for Vermont Fish & Wildlife, “Instead, several generations are born and die along the way, meaning that the grandchildren or great-grandchildren of the monarch leaving Mexico at the end of winter eventually arrives in Vermont each summer.”

Reptiles and amphibians simply lay low (aka, go dormant) through Vermont’s winter months.  Most frogs and salamanders hibernate under rotting leaves and logs on the forest floor.  Turtles while away the winter on the bottoms of ponds and rivers. And snakes generally spend the winter in mammal burrows or rock crevices below the frost line, sometimes with multiple species of snake curled up together in the same den.

Conversely, bears don’t “hibernate” in the traditional sense. Unlike other hibernating mammals such as woodchucks or bats, bears’ body temperature and heart rate stay close to normal during the winter, which they spend in more of a deep sleep than a true state of hibernation. They do this not to avoid the snow and cold (bears have thick fur and are well-adapted to cold temperatures) but to conserve energy while they wait out the winter months until food again becomes available.

“Bears are triggered to enter their den when food becomes scarce in fall or early winter, usually following a heavy snowfall,” said Forrest Hammond, Vermont Fish & Wildlife’s lead bear biologist.  “In spring, the rains and warm temperatures cause bears to leave their dens in search of uncovered nuts and green shoots that start to emerge from the melting snowpack.”

Hammond says that winter rains can make bears uncomfortable and restless and may force many bears from their dens to seek drier accommodations. “Bears sleep soundly in winters when deep snow covers the entrances to their dens but during years with little snow, bears are exposed and awaken easily.”

The survivors and thrivers

Deer, moose, beavers, otters, and many other mammals are active throughout the winter. White-tailed deer are at the northern edge of their range in Vermont and winter is the limiting factor that defines how many deer can survive here.  When snows get deep and temperatures plummet, deer seek out patches of forest with thick evergreen trees that protect them from biting winds and deep snow, making the conservation of these deer wintering areas vitally important.

Deer don’t eat much throughout the winter and deplete their fats stores as the winter months drag on. Late March through April is a critical time of year; if winter lingers too long and they don’t have opportunities to feed on emerging plants, the statewide deer herd usually declines.

Conversely, moose are well adapted to winter and--when healthy--are unfazed by the cold. They can traverse deep snows atop their long, spindly legs. In fact, a harsh winter by human standards benefits moose, as late season snows can take a welcome toll on the moose’s main parasite, the winter tick. Moose are so well adapted to cold temperatures that they often find summer more of a challenge, developing heat stress at 57 degrees or more. When temperatures get hot, moose may stop feeding to seek out cool waters to wade in. As climate change continues to drive up summer temperatures, this heat sensitivity worries some biologists who are pessimistic about the moose’s future Vermont.

For the adventuresome and curious, winter in Vermont provides a unique window into the secret world of otherwise invisible wild animals. With the snow come mammal and bird tracks, nibbled buds, and other evidence of active wildlife. These signs bring the seemingly empty and still forest alive and remind us that wildlife are all around and constantly on the move.

Surviving winter can difficult in Vermont. Wildlife need to have thick cover for shelter, an appropriate den site, open water to drink, wild food to eat, and the ability to move from place to place easily. These resources are all found in healthy and connected habitats.

To ensure wildlife thrive all year round, Vermonters can make a difference and protect connected habitats throughout the state.  Landowners can work with a wildlife biologist or forester to improve habitat on their property to give wildlife a helping hand.  Other Vermonters can help wildlife by purchasing a Vermont Habitat Stamp at www.vtfishandwildlife.com. The stamp costs $15 with donations going to the conservation of important fish and wildlife statewide habitat--everything from streambanks and vernal pools to denning and wintering areas for all the species in Vermont.