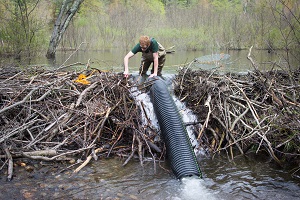 MONTPELIER, Vt. – To prevent flooding on nearby roads, the Vermont Fish & Wildlife Department recently completed construction of 19 water control devices on beaver dams in locations throughout Vermont. Known as ‘beaver baffles’ these devices allow some water to pass through the dam without breaching the dam and destroying the wetland.

The Fish & Wildlife Department expects to continue to install additional beaver baffles throughout the state this year.  The baffles are one of many techniques that department staff employ or recommend to landowners to minimize beaver damage to property or trees.  Other techniques include using fences to protect culverts, or placing wire mesh or special paint around the base of trees to prevent gnawing.

"The wetlands that beavers create provide critical habitat for a variety of wildlife such as waterfowl, songbirds, frogs, turtles, and otters.  These areas can also absorb extra water during rain events and clean pollutants from water, so we work hard to preserve these wetlands.” said Kim Royar, wildlife biologist for the Vermont Fish & Wildlife Department.

“Baffles don’t work in every situation and can’t replace the need to appropriately manage the beaver population,” Royar noted, “but they can often be used to help reduce flooding and minimize property damage while preserving these important wetlands.  Beaver baffles add to the tools landowners have at their disposal for resolving conflicts with the species”

As a result of unregulated trapping and habitat degradation, beavers disappeared from Vermont’s landscape by the early 1700s. Beavers returned to the state after the Vermont Fish & Wildlife Department reintroduced them starting in the 1920s.  Today, beavers are once again plentiful and widespread throughout the state. However, most of the roads and villages in Vermont were established before beavers became abundant again.  As a result, conflicts between people and beavers are frequent and can be a challenge to resolve. Beaver baffles have helped.

With funds granted from the U.S. Fish and Wildlife Service and generated by waterfowl hunters through the Duck Stamp Program, the Fish & Wildlife Department has installed more than 300 beaver baffles in Vermont protecting over 3,000 acres of wetland habitat since the program started in 2000.

“We receive roughly 200 beaver complaints a year,” said Royar.  “Several staff members respond to these complaints, and one technician is dedicated solely to addressing beaver conflicts from spring through fall. Despite these efforts, other management techniques must be used.  We also rely on regulated, in-season trapping to maintain a stable beaver population so Vermonters continue to view beavers as a valued member of the local ecosystem and not as a nuisance.”

Landowners with beaver problems can contact the Fish & Wildlife Department for assistance at www.vtfishandwildlife.com.  They can also contact private contractor Skip Lisle at www.beaverdeceivers.com.