For wildlife to thrive, viewers need to keep a healthy distance. Remember the less interaction wild animals and birds have with people the less stressed they’ll be and the better chance they’ll have to succeed. Some common sense and a little perspective is what it takes to share the outdoors with wildlife.

Stay Away from Nests

Nesting birds, particularly loons, herons, and eagles, are sensitive to disturbance from people. You may also inadvertently lead a predator straight to the nest.

Resist the temptation to “save” baby animals such as birds, deer or foxes that you may find alone in the woods. The mother is likely watching from a safe distance and will not return until you are gone. If you’re really concerned that an animal looks injured or unwell, contact a wildlife rehabilitator.

Animals change their behavior when humans come around. Wildlife such as moose and bear may become dangerous if people get too close to them. If you encounter a bear in the woods these simple precautions, will help ensure your safety and the safety of the bear. 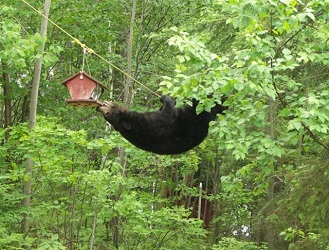 Wildlife does best when it is not given human food. Bird-watchers should bring in feeding stands between April and November to avoid attracting bears.

Keep Pets on a Leash

Don’t allow your dog to chase wildlife as the additional stress can be very difficult for many animals to endure. Consider keeping your cat indoors, as housecats that roam outside kill millions of songbirds and other small animals every year and are often targets for fisher and other predators.

Respect landowners’ privacy and ask permission to access land. Don’t leave trash in the outdoors as wild animals may mistake the trash for food and can choke on it.

Birders, hunters, photographers and anglers may seek wildlife during the same times and places. Do what you can to avoid overlapping with other users. While it’s safe to be in the woods during hunting seasons, be sure to wear bright colors.

Give Wildlife Some Space

Many popular wildlife-viewing areas have seasonally restricted access. These areas are usually for the benefit of delicate wildlife species and should be obeyed at all times.