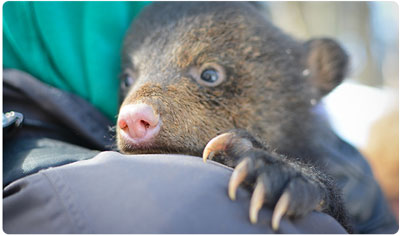 The Wildlife Division is responsible for the conservation and management of all wildlife, plants, and their habitat throughout Vermont for the people of the state. Division staff are engaged in a variety of activities including:

Division staff coordinate with a variety of partner organizations to accomplish these broad responsibilities.

The diversity of job duties is immense and accomplished with 28 permanent wildlife scientists and approximately 10 seasonal employees. Part of this staff includes four fish and wildlife specialists: Joel Flewelling, Toni Mikula, Tony Smith and Ryan Smith. They all serve key roles in assisting both the wildlife and fisheries division in all biological efforts. The division also administers several different permits ranging from scientific collection to takings for threatened and endangered species. Jon Kart oversees this effort.

All staff are located in five district offices throughout the state and the central Montpelier Office. Each district office host administrative staff to provide front-line customer service to the public, as well as to assist biologists in their work.

Staff Locator Use this link to look up the phone or email address of department personnel, by Name, Town, or Phone Number.

The Wildlife Diversity Program includes the Natural Heritage Inventory. The program is responsible for monitoring, managing, and conserving nongame wildlife (animals that are not fished or hunted). Special focus is given to the protection of endangered and threatened species, including listing, permitting, and the drafting and implementing recovery plans.

The Lands and Habitat Program is responsible for the protection of critical wildlife habitat through regulatory processes such as Act 250 and Act 248 (Public Service Board).

The program also oversees the conservation/acquisition of land in addition to the management of more than 135,000 acres on 100 Wildlife Management Areas.

Program staff also work with other state and federal land managers, such as the Vermont Department of Forests, Parks and Recreation, U.S. Forest Service, and U.S. Fish and Wildlife Service, to provide expertise for the management and conservation of wildlife and ecosystems on those public lands. Program staff also provide technical assistance to private landowners for the benefit of wildlife habitat management, enhancement and restoration through federal Farm Bill Programs, Vermont’s Use Value Appraisal program, and other avenues. Additionally, the program oversees conservation planning assistance to Vermont municipalities, regional planning commissions, and other organizations.