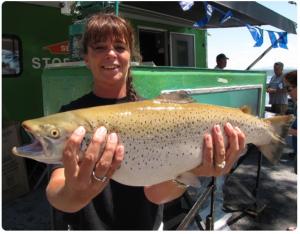 Why is a permit required to hold a fishing tournament?

The department strives to provide good fishing opportunities, which means we need to keep a pulse on fish populations and manage them to assure they stay healthy. To do so, we need data on the fish and the fishing. Tournaments are a source of such information. The permit program allows the department to obtain tournament reports and to know when and where tournaments are taking place, so that biologists can visit and obtain additional data.

Do I need a permit to hold a tournament?

Yes. A tournament may not be held unless the Fish & Wildlife Department has issued a permit. Tournaments are defined as contests where anglers pay a fee to enter and compete for a prize based on the quality or size of the fish they catch.

I want to hold a tournament in which only people below 15 years of age will be allowed to enter. Do I need a permit?

Yes, but this type of tournament is exempt from the permit fee.

Do I need a permit to hold a tournament that is part of a Special Olympics?

Yes, but this type of tournament is exempt from the permit fee.

Do I need a permit if the only participants are members of my club?

If there is an entry fee and a prize based on the fish caught, then you need a permit.

Do I need a permit to hold a practice day before the tournament?

Assuming the practice day does not by itself meet the three permit criteria (Vermont Statutes Annotated, Title 10 §4613(b)), it does not require a permit. Tournament organizers should simply include the practice days as part of their permit application for the subsequent tournament. One overall event, one permit.

Is there a penalty for holding a tournament without a permit?

The members of my club compare their catch as an informal contest, is a permit required?

Sometimes angling clubs hold informal contests in which members compare their catch, but no entry fees are charged or prizes awarded. Such a contest is not a tournament under Vermont law and does not require a permit, but we recommend contacting the Vermont Fish & Wildlife Department to minimize conflicts at access areas.

I am holding a tournament on Lake Champlain, with the headquarters in New York. Do I need a Vermont fishing tournament permit?

I want to hold a tournament on the Connecticut River. Do I need a permit from the Vermont Fish & Wildlife Department?

Is it legal for bass tournament anglers to hold and transport bass to check-in stations prior to the opening of the general bass season on the second Saturday in June?

On the application the 'Total Awarded Value' represents an estimated total of all prizes awarded. If you are organizing tournaments on multiple days and you do not meet the above conditions you need to apply for a permit for each day.

How to Get a Permit

How can I get a permit?

Is there a permit fee?

Yes, there is a fee of $50 for each tournament, with two exceptions. Tournaments that limit the entrants to people less than 15 years of age or tournaments held as part of a special olympics program are exempt from paying the fee.

How far in advance do I need to apply for a permit?

You must submit your application no less than 30 days before the date of the tournament.

How long will it take for my permit to be issued?

Permits are typically issued no later than two to three weeks before the scheduled tournament. This can vary depending on office workloads. Tournament dates are checked when applications are received, to be sure that permits are issued in time.

I need to know sooner if I will get a permit, what should I do?

Can I hold my tournament at a State Park?

If you are applying for a permit for a fishing tournament to take place at a State Park, you will need to contact the Park Regional Manager in the location of the State Park prior to the tournament. The Department of Forests, Parks and Recreation requires a Special Use Permit in order to use a State Park location. The fee for this permit is $50.00. Get more information about applying for a Special Use Permit

Do I need a special use permit to use a department access area as the headquarters for my tournament?

The department's policy is to accommodate this use of its access areas as much as possible, as long as that use does not interfere with normal use. Large tournaments staged at a fish and wildlife access area may require an access use permit.

The tournament permit application asks about your intended use of department access areas, allowing the department to deal with both permits through this application. You do not need to apply for multiple permits.

Can I e-file my permit application?

No, we are not set up for e-filing at this time. You can download the documents you need but your application and check must be mailed or otherwise delivered to our Essex Junction office.

How can I find out about scheduled tournaments?

A list of scheduled tournaments is included on this website and is updated as new permits are issued.

Who should I contact if I want to participate in a tournament?

The contact information for tournament organizers is included in the listing of scheduled tournaments.

How often is the listing of scheduled tournaments updated?

This information is updated from our database daily. Please keep in mind that permits are not issued immediately after the department receives the application. Permits are typically issued no later than two to three weeks before the scheduled tournament, and will then appear in the listing.