"Hunting" in Vermont means deer hunting. Almost all of the state's 73,000 resident hunters hunt deer at some point during the fall and more bucks are taken per square mile in Vermont than in any other New England state.

Vermont's deer herd is managed to minimize winter mortality and to improve both herd and forest health. For years "bucks-only" hunting resulted in the herd booming or crashing, depending upon winter severity. Now, there is regulated antlerless deer hunting through either-sex archery hunting, the youth and novice deer weekend, and a controlled permit system during the muzzleloading season.

No more than four deer per year, only one may be a legal buck. Youth and novice hunters can take two legal bucks, provided one is taken during the youth or novice season, not to exceed the annual limit of four deer. No antler restrictions apply for Youth Deer Weekend. 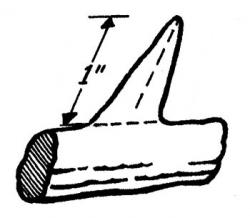 In Wildlife Management Units A, B, F1, F2, H, J1, J2, K, N, and O a legal buck is any deer with at least one antler with two or more antler points one inch in length or longer.

A hunter who believes they have legally killed or wounded a deer during hunting season may engage a person who has a “Leashed Tracking Dog Certificate” issued by the department to track and recover the animal during the season or within 24 hours after the season ends.